Mission Briefing:
“The country is being torn apart by Barclay and his allies and here we are again back where we started. It is very frustrating. At least for now however our mission is clear…Defend.”

At the beginning of mission 2, set off a market place (gratis) and delete Olaf’s former wooden palisades and gates bringing you back some wood and regaining more free space for future projects. Place three or four sawpits next to the stocks of trees nearby the stone deposit. Stabilize your food supply and add 4 or 5 hunter’s posts and two more apple farms.

When wood stocks allow, build up two (later a third one) quarries and at least four ox tethers at the stone deposit. Don’t forget to add more hovels if your population is running low in view of a flourishing economy. At the same time, you can start promoting your popularity by brewing up some ale. Two hops farms and three brewers will produce enough ale for constantly increasing ale consumption in your inn. If you should suffer from lack of wood either place more sawpits or buy some wood additionally.

I built up two eel ponds, the Lord’s kitchen and a pig farm producing very delicious dishes for your Lord’s banquet, and also necessary to acquire more honour bonus points. When the first stone supply arrives in your stockpile, you can also site the treasury, the barracks, and the armoury as well. That’s the moment the monks will come trying to carry away stone blocks for the reconstruction of their ruined monastery.

In the meantime, a hostile vanguard of 10 archers and 15 spearmen moved across the bridge heading the steed path up to the western plateau. They will attack all the monks getting nearer to them. For that reason, I ordered two catapults close to the riverside targeting those annoying troublemakers by sustained fire (as shown on this picture underneath). 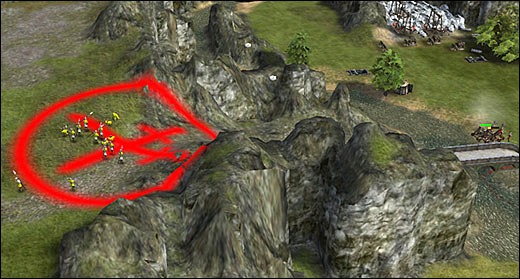 In doing this way, I was able to kill most of them without any casualties. After a little while, I picked up a handful of spearmen to finish the remaining weakened survivors.

It’s quite evident that you may not neglect the military strength in this defence mission. If you look at the following picture, you’ll see a small wall segment equipped with rolling logs and one lookout tower behind it. I assume you’ll wonder why I placed the walls there? Well, the enemy’s assaults will start exactly in opposite to this strategic spot. 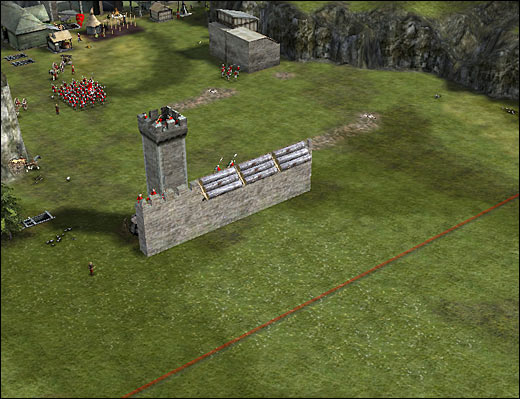 Additionally, man walls and towers with hordes of archers (eight in each tower), so you’ll be well-armed against all forthcoming attacks. Add five fletchers and one pole turner to force your weapon machinery, systematically, but as fast as possible. By the way, complete a well-performing economy and erect a few gong pits, too. You will realize that a growing population produces loads of filth.

One or two wheat farms, one mill, and two bakeries will guarantee a more varied menu for your people. Adjust rations to double for extra honour and keep the taxes high depending on your food and ale consumption for a faster recruitment of archers and spearmen! Wall in your settlement (as shown on this next picture), and add more towers manned by archers. 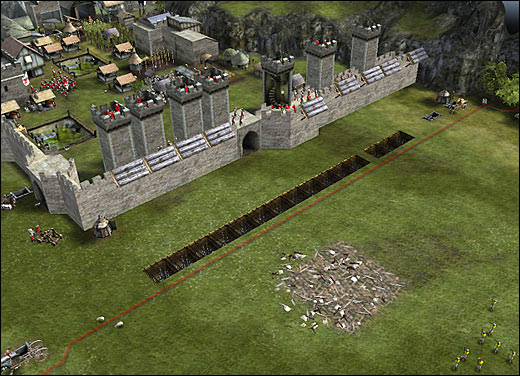 I also integrated two gatehouses, one for smooth stone transportation, and the other one to plan counter attacks eventually. If you are placing several killing pits and mantraps along the borderline, only a few invasion troops will succeed reaching your walls. Efficient rolling logs assisted by your catapults from the distance are very useful in this mission to destroy the enemy’s siege camps, and spearmen (aggressive posture) up on the walls will cut down automatically all hostile ladders put against the walls.

Be prepared for the last siege! Attention! You have to deal with a changed position of the siege camp! (On that picture below) 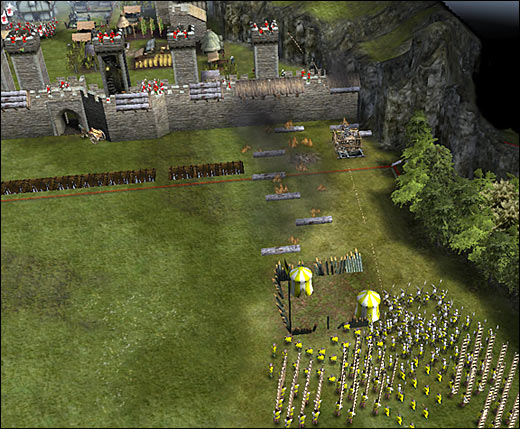 If you don’t destroy it quickly (use rolling logs!), the enemy will approach with numerous catapults, so keep a sharp eye on this location as soon as you’ll get the final enemy’s threatening message. Eventually, send out a few spearmen to finish some stragglers hanging around.

Meanwhile, the monastery should be rebuilt and if you watch a delegation of monks leaving the monastery, victory will be yours!

Finally, here’s an overall view of different buildings and units: