Your good old friend Sir grey will be under attack by Edwin the traitor. Defend Sir Grey! Justice must be victorious! 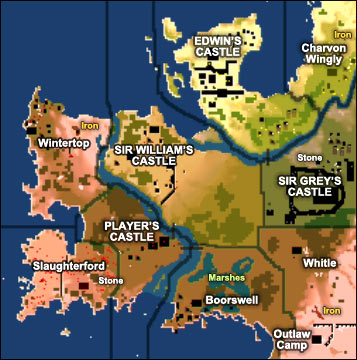 Don’t be afraid! It is true, chapter 10 of the Path of Peace Campaign is a kind of military mission, but it’s easier than it is supposed to be. Sir Edwin will immediately give marching orders and take the offensive. This chapter is bound up with the previous mission, and you shouldn’t have any troubles if you took my advice at the end of chapter 9. Thus, you will be in a good position to make short work of Edwin’s scoundrels within a few minutes. Edwin’s threats will burst as soap bubbles do.

Well, order your (100 -120) archers still waiting in your province Whitle to the front of Sir Grey’s castle, namely to the borderline between Sir William’s and Sir Grey’s territories (as shown on the first picture). 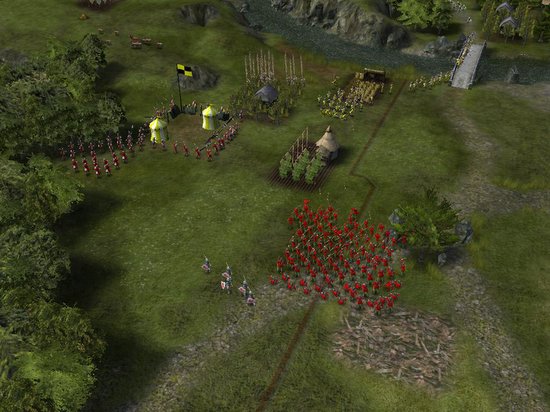 Also double click on your idle spearmen heading for that point close to the edge of the forest, that’s where Edwin’s siege camp will be set up. These siege tents directly erected in opposite to Sir Grey’s main gate have to be destroyed at all costs, before those dangerous and destructive catapults, rams and a siege tower will be brought to action.

Your five reliable veteran swordsmen who have been serving you well a few missions ago (remember the end of the outlaws) could follow your spearmen either to assist or to protect them, but that’s not urgent at all. While Edwin’s men are crossing the northern bridge, your two task forces should be arrayed in time on their new positions ready to give the enemy a proper reception…

Stop! Now pause the game and press the “P-key”. Before we continue watching the scene on the battlefield, let’s return to our estate Whitle for a short while. You will need all your partner estates in a good shape in view of the subsequent 12th mission. Therefore, use this opportunity to take some preparations for the final showdown. If you haven’t done it yet bring back human life to Whitle and set a stable food supply in motion, as a solid self-supplying economic basis will consequently guarantee success and of course happy peasants. 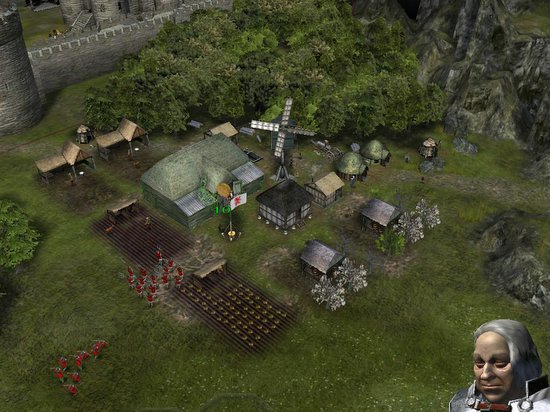 While your spearmen are busily encircling and pulling down the siege camp, your archers (aggressive stance!) will vehemently go for all hostile units in range. The enemy won’t be able to form up or line up in a reasonable way. Most of Edwin’s troops will die, just a miserable contingent of wretched swordsmen may survive, resigning and retreating before the assault is actually starting.

The whole scenario will take between five and ten minutes to finish. In case that the spearmen/swordsmen should fail destroying the siege camp, don’t worry! It’s always possible to neutralize the approaching siege machines by your archers. Don’t get nervous if Sir Grey’s castle should be partially damaged. Rely on your archers and quickly reinforce your troops if the worst comes to the worst. Then just buy in about 20 bows (if not available in your armoury) for a faster recruitment.

Finally, none of Edwin’s men should make it up to Sir Grey’s keep…victory!