Castle of the Week 124 – Cape Kaliakra

Kaliakra is one of the most breathtaking places along the Bulgarian shore. Stretching more that two kilometers into the Black sea, it’s known as the longest cape in the Balkan Peninsula. The word Kaliakra comes from the Greek word “καλός” (beautiful) and “άκρα” (fortress). Located 72km north of Varna and just 12 km from Kavarna, the area is close to a railroad and airways. Now largely protected, the Kaliakra area hosts a unique blend of dramatic cliffs, unpolluted crystal waters and rolling countryside. The area is famous for its dolphins and sea bird nesting sites, both of which are attracted to its secluded, undeveloped location.

Just 20 minutes from the coastal town of Kavarna, Cape Kaliakra contains a Bronze Age archaeological site and fort. It is popular with ecological and cultural tourists who visit in increasing numbers each year. The cape consists of 60-70m-high limestone rocks, the inaccessibility of which has been the main reason for the construction of an ancient fortress named “Trisis” there. The fortress was successively used by Thracians, Romans, Byzantines, and Bulgarians. Today there are several remains of those ancient settlements, which can be exhibited in a small museum. One can also read there a legend telling the story of several Bulgarian girls who chose to jump from the high cape into the sea and to die to avoid being captured and converted to Islam by the Turks.

The Thracians were the first to use the cape – mainly for trading purposes. They controlled it until around 335 BC, when they were forced to flee from the rising Macedonian Empire that conquered Thrace. The legendary Alexander the Great conquered the peninsula and also used it for trading. As the general advanced and battled his way to Persia the cape became inactive and soon bandits started to raid it, but without any luck. The fortress was well fortified and with proper garrison it was nearly impregnable. The city design is amazingly simple and efficient.

Since it needs protection from one side only, all the defenses can concentrate at that location and thus increasing the strength of the castle. The limestone rock was unsuitable for farming and most of the agricultural buildings were located outside the castle, where the land was fertile. During sieges these buildings were unusable, but food certainly wasn’t a problem. Kaliakra had its own dock and made regular fish trips deep into the sea. If the first wall should ever fail, there is a second one which tightened the space and created a funnel effect. After that came the inner city wall, built directly over the edge of the cliff. The only weakness the castle had was the lack of an elite army. When the stronghold was in danger all of the men and boys were gathered and armed. Their skills were far from perfect and, despite the heavy fortifications, the castle wasn’t that strong. The city of Kaliakra managed to exist so long, because it wasn’t guarding anything. It didn’t protect any passages or trade routes, nor did it control the sea, so it wasn’t considered such a threat and the citizens rarely faced any enemies or invasions.

As time passed the stronghold grew and when the Macedonian Empire fell, it reached the peak of its glory. The ancient geographer Strobe described that Kaliakra was the capital of King Lyzimah, one of the successors of Alexander the Great. He hid precious gold artifacts and treasures, stolen during the marches against Persia in the caves around the cape. With the beginning of the barbarian incursions, Kaliakra was enlarged by two more walls built far away from the narrowest part of the peninsula, where the main wall was located. In 513 AD Kaliakra became the place of dramatic events. The head of the Federates (hired warriors from barbaric tribes), Vitalian, organized a revolt against the Byzantine Empire. Chroniclers think that Vitalian was Bulgarian. He reached the small city of Sozopol, where he was defeated. The Empire’s counter attack was merciless. In the major battle, which took place beneath the wall of Kaliakra, Vitalian was killed and the revolt was crushed. The abyss around Kaliakra was filled with countless bodies and the water was colored with dark red blood.

The history of Cape Kaliakra through the ages of the Byzantine occupation is vague and unclear. Historians believe that the castle became an estate for rich governors; some say that the fortress has not been used by the Byzantines at all.

The golden age of Kaliakra was during the second half of the 14th century AD, when it was the capital of the Dobrujanian (Karvunian) principality, ruled by Dobrotica. It covered the northeastern parts of the Bulgarian lands cut off from the central power. On the July 31, 1791 along the shores of Kaliakra one of the biggest naval battles in the Black sea was fought. The Russian squadron, led by Admiral F.F. Ushakov, crushed a Turkish fleet. This victory was the last of the Russo-Turkish War (1787-1791) sea battles. During the Turkish occupation the keep was used as a Muslim spiritual center. The land of Kaliakra was the last remaining fortress to be recovered from the Turks.

Today all that remains at Kaliakra are parts of the sewer system, baths and the residence of the duke. All the archaeological finds are gathered and placed in a small museum made in one of the caves. A fortress which has lasted well over 650 years, Cape Kaliakra is a symbol of Bulgarian power and resistance.

The Legend about Saint Nicholas, the patron of sailors

St. Nicolas was fleeing from the Turks and God extended the ground beneath his feat, so he could escape; this created the cape. In the end Saint Nicholas was captured and a small chapel was built there, symbolizing his grave. At this very same place during the Ottoman rule was established a dervish monastery, which was thought to guard the powers of the Turkish monarch, Sarai Sultuk.

Special thanks to these photographers for allowing use of their images:
Chris Andreev
kirilart
Karolina Patrycja 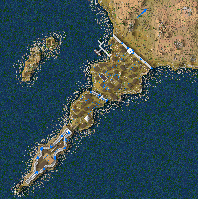