Warkworth Castle is a fairly well-preserved fortification located in Northumberland, England. About one mile from the North Sea, the castle sits high atop a hill in a loop of the winding River Coquet protecting the village and its strategic river crossing. Although the Village of Warkworth dates back to at least the 8th century, the first castle was not constructed until nearly 400 years later during the mid 12th century. The first castle was a timber motte & bailey structure built by Henry, Earl of Huntingdon and Northumberland, son of David I of Scotland. During this time, Warkworth was under Scottish control.

In 1147, Northumberland was re-taken for England by King Henry II and was given to Roger FitzRichard. The FitzRichard family held the castle until the early 14th century. During this period, the original wooden structure was gradually replaced by a stone-built castle. In 1292, the caste was garrisoned with troops from the crown during the Anglo-Scottish wars and considered safe enough for King Edward I to visit.

In 1332, the castle passed to the crown. The descendants of FitzRichard fell on economic hardship, the cost to upkeep the castle became too great for them to bear. After being besieged twice by the Scots, and due to its strategic location, the castle was deeded to the powerful Percy family (who also owned nearby Alnwick Castle) to exert English control over the area. The Percys upgraded the defenses of the castle by building a magnificent keep and maintaining residence at both Warkworth and Alnwick.

The Percy family was among the most powerful in Northern England. They often clashed with the crown producing devastating results. In the rebellion of 1403, the castle fell to the King’s forces and suffered extensive damage to the curtain wall. The castle was forfeited to the Crown, in whose ownership it remained, until Henry V restored it to the Percy family. During the War of the Roses, the castle again was forfeited to the Crown but returned once more to the Percys in 1470.

As fate would have it, the Catholic Percys sided with Mary, Queen of Scots, against Elizabeth I in the uprisings of the northern earls in 1558. Thomas Percy, 7th Earl of Northumberland, was executed in 1572 and the castle was pillaged by Elizabeth’s soldiers. This began a long state of disrepair for the castle. It was further damaged in 1648 when garrisoned by Parliamentary forces. Over the centuries that followed, the castle was picked through and its pieces used as building materials by the area’s local inhabitants. The castle remained a ruin until the mid-nineteenth century. The 3rd Duke of Northumberland began preservation work during this time period. In 1922, the 8th Duke of Northumberland handed the castle over to English Heritage who own and maintain the castle today.

Occupying an area if nearly six acres, the castle consists of three main sections. The Outer Bailey, the Inner Bailey and the Keep all had specific purposes and house structures that would have been necessary for daily life inside the castle walls.

A tunnel under the foundations of the Collegiate Church provided the main access to the Inner Bailey.

The Inner Bailey is triangular shaped. It is bordered to the south by the Collegiate Church and to the east and west by curtain walls. The Inner Bailey houses the brewery and laundry.

The magnificent, cross-shaped Keep was built on the medieval motte or mound at the northernmost part of the castle which dominates the village of Warkworth. Rising to the height of three stories, the Keep is basically a smaller castle within the larger structure. The Keep contains a hall, chapel, kitchen, pantry and various chambers. Crowning the Keep, a central watchtower provides views of great distances for safety. Another notable feature of the Keep is a central light well that provides daylight to even some of the innermost rooms of the castle. The light well also provided a system for collecting rain water to flush the latrines.

Today, the castle is owned by English Heritage and open to the public most of the year. The castle has been featured in many movies including Disney’s A Knight in Camelot and various other productions.

Special thanks goes to the following for allowing use of their images: 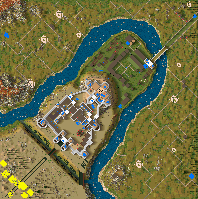