The staff sincerely wish every single forummer on SHH a very Happy Christmas and that they have the most joyous Winter Solstice Celebrations! Spend time with you loved ones and give the little ones hugs because they won’t be so little for long. Enjoy peace and love, values shared across all faiths, creeds, and philosophies. Celebrate the earthly redemption of sunlight as we tilt back towards the Sun, and may next year be most pleasant and prosperous.

PS: Check out the Christmas thread!

Design your own T-Shirt for Firefly Contest

Darren of Firefly Studios, has announced they are offering one lucky fan the chance to have their own design put onto a t-shirt and sold in their new Zazzle store! Not only will the winning entrant be revered by Firefly Fans worldwide but they will also win their t-shirt design.

The closing date for the competition is 4th January 2010, so you have plenty of time over Christmas to perfect your designs. The winning design will be announced the following day.

To submit your entry visit Firefly Studios and post a description of your chosen design.
More info here; Design your own T-Shirt for Firefly Contest.

Firefly Studios has released a new map pack for Stronghold Legends. This pack includes 13 maps made by the developers and installs the Arthur’s Challenge campaign trail that was exclusive to the deluxe edition. You can download at Firefly Studios here.

Hear ye, Hear ye! Firefly Studios has announced that an anthology of the Stronghold games is being shipped to stores to be put on shelves on October 27 in the US this year and released everywhere else next year. This “DRM-free” package will include all of the Stronghold games. While many of us already possess the series in its current form, the degree of convenience for a complete collection, especially if it becomes available through online content distributors, is alluring. Moreover the lack of DRM opens the possibility that all of the games could be run inside virtualized desktops on other operating systems, including Mac, Linux, and BSD.

DKZS has submitted an article profiling Sir Grey from Stronghold 2 with details on the AI’s strategy and tips on how to defeat him. The article on how to capture Sir Grey, can be found here.

We would like to welcome to our staff,Lord Michael I.

He is the author of the Crusader Second Skirmish Trail Walkthroughs, an active poster and a long time helpful member of our site.

Please give him a fantastic Stronghold Heaven welcome! Here.

Cherub WLD_Arthus has resigned from his moderation at the Stronghold Heavens. He has been a long time community member who would say it like it is. You can wish him well here.

At the beginning of the Medieval Era, Korea was divided into three kingdoms. In the north was the large Goguryeo kingdom, but it was not as rich as the smaller, southern kingdoms, Silla and Baekje. Goguryeo often had to defend its northern borders from the Tang and Sui Chinese dynasties, while fending off Baekje and Silla in the south when they would occasionally form alliances. Eventually Silla or Baekje would betray one another and ally with another power to expand their domains at the expense of their former ally. This cycle continued until Silla allied itself with the Tang Chinese dynasty which invaded Baekje by sea. The vastly outnumbered Baekje army was quickly exterminated in one battle with the Tang-Silla forces in 660 A.D. The Baekje kingdom dissolved after the capital city Sabi was looted and members of the royal family captured or killed.

In 662 A.D., large revolts in northern Baekje threw off the Tang-Silla government and a former Baekje general, Boskin, who declared the Baekje prince in exile, Buyeo Pung, the rightful ruler. He attempted to recapture the 40 counties and sent 100 Tang Chinese prisoners to the Japanese court (who were also intermarried with the Baekje royal family) to request military aid. Boskin and the Revolt were in dire straits being besieged at their capital in Churyu, when the Japanese sent over 40,000 troops along with their navy to relieve them.

Somewhere between 7,000-10,000 Japanese troops were killed, Several Japanese admirals and generals fell, and the defeat was the greatest that Japan had ever felt up to that time, so they returned home. Without the aid of Japan, Churyu surrendered and many important rebels fled north to Goguryeo as the Silla government punished the region. Japan lost its last important mainland ally, and began building fortifications along its coast to defend itself from anticipated Silla or Tang invasions. They would not send troops to Korea again until the 1500s. The Tang would later launch a two-pronged attack on Goguryeo, resulting in its fall in 668.

If you would like to learn more about this battle, check out Wikipedia and this forum thread.

Today in 778, the Franks were clearing their dead and wounded and looting the bodies at Roncevaux Pass high in the Pyrenees. Among the dead was Charlemagne’s chief paladin, Roland, several other paladins and several French aristocrats. The Battle of Roncevaux Pass was Charlemagnes last battle of his first campaign to capture Spain from the Saracens.

Charlemagne had captured Barcelona nad Pamplona, but he had been stopped at Zaragoza, the capital of the Upper March of Al Andalus. Charlemagne’s momentum was spent while he was held up at this city and a Saxon rebellion in Germany required him to withdrawal. He negotiated with his enemies and received a large tribute of gold and hostages, including General Thalaba and Governor Sulayman al-Arabi. On his retreat, he pulled down the walls of the Chrisitian Basque city Pamplona. In the mountains, the rear of the retreating army was attacked by lightly armed, Basque guerrilla forces that pillaged the baggage train, took the gold, and released Sulayman. Roland and the rear guard were annihilated and the guerillas escaped under the cover of darkness with their loot before a punitive, recovery force arrived.

The battle had little impact on the Spanish, but the Franks romanticized in the oral tradition during the 11th century, morphing it into a battle between Christians and Muslims. The Song of Roland spread through France, becoming the first epic poem of France. The Franks were badly wounded from this campaign and would return to Spain, but only to retake Barcelona. The city of Zaragoza remained an important Muslim city and became an independent emirate (Taifa) that survived into the 11th Century.

A translation of the Song of Roland can be read here at Medieval Sourcebook.
More about the Battle of Roncevaux Pass can be found here at Wikipedia.

“Castle Attack Legends is a game that was developed to advertise and promote the release of Stronghold Legends. Programmed by Dustin Russell, the game was never released as it was considered too similar to Castle Attack 2 to warrant a proper release. The game is now being made available, purely for completeness sake.”

To read more on the Castle Attack games check here.

Lord Tanthos has handed in his wings, his pale glow returning to a normal hue. His helpfulness in the Stronghold 2 and Legends sections in the past will be missed. Let us wish him well in this thread.

Zen has announced on his tech blog a new feature in the Downloads, the Favorite Icon on files’ pages.

Clicking this icon will add the file to a collection-list in their Downloads Profile as being a favorite. This helps us keep track of our favorite maps, making them easily referenced by others who look at our download’s profiles or when we refresh our minds to recommend them. Reiterating Zen, special thanks to “Elpea for coding the feature; Jay for writing the functional specifications; Pecunia for guidance and the deployment of the update; and our small team of testers who provided valuable feedback during testing – LukeG, Shelper, and Kester.”

Thanks Zen and Co!

We are pleased to announce that we are painting another community member in green and little cherub wings are appearing.

Doomsword, has become a new moderator for the Stronghold Legends and Stronghold 2 game subforums. In addition to his moderating duties, he will also contribute content to the main site. He has great working knowledge of both games and a willing and helpful posting style. He hates unanswered threads.

Please allow our newest member time to settle in, adjust to his new role and take on board exactly what is required in the interim.

Please join us in in congratulating Doomsword here.

Ready for Lift Off!

I’m pleased to announce that Peter2008 has become a staff member of the Stronghold Heavens. He will moderate the Scenario Design forums as well as the 2D Game forums. Please welcome him in this thread.

Castle of the Week 129 – Castel Sant’Angelo 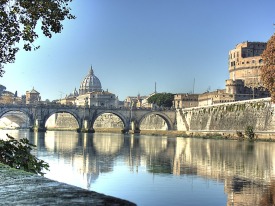 It is our pleasure to announce the 129th Castle of Week, Castel Sant’Angelo. Castel Sant’Angelo was originally a mausoleum, whose construction was begun by the Roman Emperor Hadrian on the right bank of the Tiber River in 123 A.D. on the outskirts of Rome in Domitia’s gardens. The mausoleum was completed by Hadrian’s successor, Antonius Pius, between 135 and 139. Castel Sant’Angelo is the second largest construction in Rome after the Coliseum and looms over the Tiber, guarding the eternal city. Much more can be discovered about this castle in the article.

Firefly Studios has announced Stronghold Kingdoms with a target released date in 2010. It is an MMO, massive multiplayer online game. You build your kingdom online while battling other players and joining teams. There are factions and elections, liege lords and vassals, and a ranking system. Other features include exploration, research, and trade. An overview of available screenshots reveals the classic 2-D architecture and some new structures. More about the game is expected to become available in the upcoming months.

Cherub Surajsubba has hung up his wings. He resigns from his moderation position caring for the Crusader sections, which he has done diligently. You can wish him well here.

DKZS has submitted an article profiling Edwin from Stronghold 2 with details on the AI’s strategy and tips on how to defeat him. The article on the Rat-analog can be found here.

What a great way to intoduce the games to your family and friends who have not had the chance to play these great games.

Firefly have launched a brand new website! There is loads to see including a link to download modding tools for Crusader. Darren has posted a thread in the Sword and Buckler Inn to let us know about it here.

Doomsword has found a way to add a wee bit more height to the conventional maximum. He concisely reveals his secret in this thread.

The second ever Stronghold Heaven Forum Awards are now complete with Venomrider’s Presentation Thread in which the winners were announced. Our previous awards have been resuscitated by ericgolf and summarized here. Felicitations to the victors and well done to those nominated. Now, let’s continue the good work this year! 🙂

The 2009 SHH forumer awards have now started. Members are invited to vote for their favorite members and suggest award ideas. Please take time to stop in and vote here. Let’s let everyone know who we respect and what maps we love to play!

HeavenGames will be undergoing server maintenance today, Wednesday, February 4th. All HG websites will be offline from 9pm to 12am EST (Thursday, February 5th, between 2am and 5am GMT). Don’t panic!

A Cherub has been promoted to an Angel for his efforts in the downloads, dedication, and helpfulness. He keeps the downloads running steadily and helps out on the forums. Congratulations can be made to ericgolf here.