Castle of the Week 127 - Urquhart Castle

Urquhart Castle sits atop a rocky point jutting into Loch Ness and was an ideal site for a fortified residence. For over a thousand years, the site served as military barracks, hotel, court, administrative center, seat of power and refuge for those seeing protection within its walls.

The surrounding fertile lands and waters provided an abundant supply of crops, fish, fuel and game. It is surrounded on three sides by the Loch leaving only one side of the castle vulnerable to attack. The landward side of the castle was defended by a dry moat 5m deep and 30m across at its widest point. A stone cause way with a draw bridge spanned the moat.

The castle has the shape of an hour-glass divided into two baileys (Upper and Lower). The Upper Bailey is the site of the original keep, probably a Norman style shell-keep built in the 13th century. It also contained a smithy and dovecot.

The Lower Bailey contained a strong gatehouse flanked by two drum towers which defended the causeway leading to the castle. Also in the Lower Bailey were a large courtyard, kitchen, great hall and storehouse. The most prominent feature of the castle is the magnificent five storey keep known as Grant’s Tower constructed in the 15th century. It was also defended by its own moat and drawbridge.

Archeological finds suggest the site has been used since the time of the Picts. St Columba visited the area and recorded the conversion of a Pictish Nobleman and his family in the 6th century. In fact, Urquhart translated from Gaelic means “a fort or knoll.”

In 1228, the province of Moray rebelled against King Alexander II of Scotland. After the rebellion was put down, Alan Durward was given lordship of Urquhart. He is credited with building the first stone castle on the site in the mid 13th century.

In 1296 the castle was taken by the English as they invaded Scotland. In the summer of 1297, Andrew de Moray led a band of Scotts on a daring night assault of the castle. The attack failed but it prompted orders to strengthen the castles garrison and defenses. After the English defeat at the Battle of Stirling, Urquhart was once again in Scottish control.

In 1303, King Edward I of England ‘Hammer of the Scots’ began his second march into Moray. Sir Alexander de Forbes led the Scottish defense from within the castle walls. The garrison surrendered only after a long hard fought battle. Urquhart Castle was retaken by Robert the Bruce in 1308 and entrusted to his nephew Sir Thomas Randolph. After Robert the Bruce’s death in 1329, England invaded once more. Urquhart was only one of five castles that kept the Scottish cause alive. Peace finally came in 1357.

By the 1390’s war once again came to the Great Glen. This time the threat was from the MacDonald Clan, Lords of the Isles. For the next 150 years the castle and the Glen was scene to constant warfare as it changed hands back and forth between the MacDonald’s and the Crown.

In 1509, John Grant was given lordship of Urquhart and the following orders by King James IV of Scotland: “to repair or build at the castle a tower, with an outwork or rampart of stone and lime, for protecting the lands of the people from the inroads of thieves and malefactors; to construct within the castle a hall, chamber and kitchen, with all the requisite offices, such as a pantry, bakehouse, brewhouse, oxhouse, kiln, cot, dove grove and orchard, with the necessary wooden fences".

The castle saw its last military action in 1689 when a small garrison of around 200 men under Captain James Grant held the castle against a Jacobite force of around 600. When the garrison finally left in 1692, they blew up parts of the castle to prevent further military use. Over the following decades the castle was abandoned and fell into disrepair. Locals salvaged stone, timber and lead from the roofs. In its weakened state, part of the keep collapsed in a storm in 1715. In 1913 the castle was acquired by the state and preservation efforts were begun.

Urquhart has been fought over and changed hands many times during its turbulent history. Today, it is one of the most visited historic sites in Scotland. Visitors can gaze at the rugged landscape, take in views of the spectacular lake, stand atop the ruins of the castle, and if you are lucky, you might even catch a glimpse of NESSIE.

Write-up by Duke of York.

Special thanks goes to the following sites for granting permission to use their images: 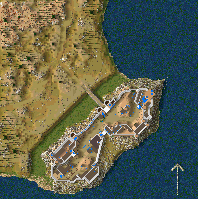